Chris was born in Grand Rapids, Michigan on June 18th, 1949, the second child of Doris Christiansen Van Allsburg and Richard Van Allsburg. His sister Karen was born in 1947. 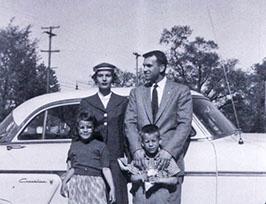 Chris’s paternal grandfather, Peter, owned and operated a creamery, a place where milk was turned into butter, cream, cottage cheese, and ice cream. It was named East End Creamery and after they bottled the milk (and made the other products) they delivered it to homes all around Grand Rapids in yellow and blue trucks. 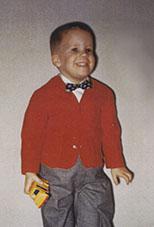 When Chris was born, his family lived in an old farm house next door to the large brick creamery building. It was a very old house that, like the little house in Virginia Lee Burton’s story, had once looked over farmland. But by 1949, the house was surrounded by buildings and other houses. Chris’s father ran the dairy with Chris’s three uncles after his grandfather Peter retired.

When Chris was three years old, his family moved to a new house at the edge of Grand Rapids that was part of a development; a kind of planned neighborhood, that was still being built.

There remained many open fields and streams and ponds where a boy could catch minnows and frogs, or see a firefly at night. It was about a mile and a half to Breton Downs School, which Chris walked to every day and attended until 6th grade, when the Van Allsburg family moved again.

The next house they lived in was an old brick Tudor Style house in East Grand Rapids. It was a street that looked like the street on the cover of The Polar Express. The houses were all set back the same distance from the street. Between the street and the sidewalk grew enormous Elm trees whose branches reached up and touched the branches of the trees on the other side of the street. Chris moved to this street with his mom, dad, sister, and two Siamese cats. One named Fafner and the other name Eloise.

Chris went to junior and senior high school in East Grand Rapids. He didn’t take art classes during this time. His interests and talents seemed to be more in the area of math and science.

Because of the high level of academic achievement at East Grand Rapids High School, and because each year a number of students chose to go to the University of Michigan, they sent an admissions officer to Chris’s high school. The admissions officer would interview students and admit them on the spot if their grades and test scores satisfied the school’s requirements.

Chris remembers that interview as a fateful day in determining what would become his career:

“I sat in a waiting area in the guidance counselor’s office with an admission form. Before I finished filling it out I was called in to see the man from the University. I entered an office and handed him my form and took a seat. He looked it over and noticed that I had not chosen a college within the University. That is, I had not indicated what I intended to study when I got to the University. I asked to see the form and, like looking over a menu, noticed a listing for ‘college of A & D,’ and asked the man what that was.

“He explained that was the college of Architecture and Design, which included the art school. It had never crossed my mind that someone could go to college and make art. I hadn’t taken any art in high school but I liked to draw and it occurred to me that studying art could be a lot of fun. I told the admissions officer that art school sounded interesting. Perhaps I’d give that a try.

“This was in 1967, the last year that the University admitted art students without a portfolio [a sample of their art work] which meant that the admissions officer could simply admit me if he was satisfied with my test scores and high school transcript.

“Unfortunately, my transcript showed that I had not taken any art in the last four years. The admissions man pointed that out and said I was not qualified to enter the art school. I was seventeen at the time, and like a lot of seventeen year olds, I liked to try to outsmart adults. So I told the admissions man that because my artistic skills were so advanced, I studied art privately on Saturdays, rather than take high school classes. I told him I’d been studying privately for some years and was currently doing oil painting. None of this was true.

“He seemed to be impressed, but not entirely convinced. He asked me what I thought of Norman Rockwell. I knew that some people didn’t like Norman Rockwell, a famous painter/illustrator who did magazine covers. I wasn’t sure if the admissions man was measuring my sophistication, in which case I’d have to answer that I didn’t think much of Rockwell. Or if he was measuring my values, I didn’t have a strong opinion one way or the other, but I was pretty sure the admissions man did.

“I guessed that he was probably a fan of Mr. Rockwell, so I told him something like, ‘I believe Norman Rockwell is unfairly criticized for being sentimental. I think he is a wonderful painter who captures America’s longings, America’s dreams and presents American life with the drama and sensitivity of a great playwright.’

“The admissions man pounded his fist on the table and said ‘Boy, you are absolutely right.’ He signed my papers and I became, that day, an official art student.”

Chris went to the University of Michigan in the fall of 1967. Much to his surprise, art school did not mean a few art courses a week. It meant art classes pretty much all the time. At first he felt very much out of place because the other students had so much more experience than he had. But he discovered in sculpture a place where he could use the skills and craftsmanship he’d developed as a boy building model cars and boats. 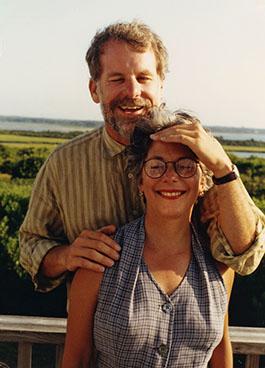 He majored in sculpture at the University of Michigan, where he learned bronze casting, wood carving, resin molding and other techniques. He graduated in 1972 and went to graduate school at the Rhode Island School of Design (RISD) to continue his study of sculpture.

In 1975, after earning his M.F.A. degree at RISD, Chris set up a sculpture studio in Providence, RI. He also married Lisa Morrison, whom he met at the University of Michigan four years earlier. Lisa was also an art student who had studied education and had become an elementary school art teacher in the Providence school system.

Chris first exhibited his sculpture in New York City in 1977 at the Alan Stone Gallery. He exhibited elsewhere in New England, and though sculpture was his primary interest, he had begun drawing pictures at night in a little room in his and Lisa’s apartment. He did not think of these drawings as very important, but others did. Alan Stone showed two of them to a curator from The Whitney Museum of Art, where they were exhibited in 1978.

Lisa, who used picture books when teaching her 3rd grade students, encouraged Chris to consider making illustrations for a story book. A friend of Lisa’s, illustrator and author David Macaulay agreed with Lisa that the kind of pictures Chris was making could be effective book illustration.

Macaulay encouraged Lisa to show Chris’s work to his editor, Walter Lorraine, at Houghton Mifflin Company in Boston. Mr. Lorraine responded positively to the pictures Lisa showed him, but rather than enlist Chris to produce pictures for someone else’s story, Mr. Lorraine encouraged Chris to think about stories of his own.

Though still involved in making sculptures, Chris set aside some time and created the story and pictures that became The Garden of Abdul Gasazi, published in 1979.

Since then, Chris has written and illustrated 19 books and has illustrated three others that were written by Mark Helprin.

In 1980, he was awarded the Caldecott Honor Medal for The Garden of Abdul Gasazi.

Chris has also been awarded the Regina Medal for lifetime achievement in children's literature. In 1982, Jumanji won the National Book Award for Book Illustration and in 1996, it was made into a popular feature film.

In 1991, Chris and Lisa became parents when their daughter Sophia was born. In 1995, their second daughter, Anna was born.

In 2004, The Polar Express was made into a major motion picture starring Tom Hanks.

Chris lives in Beverly, MA, on Boston’s North Shore. For recreation and amusement, he rides his bike and plays tennis. He is not really the master of any instruments, but can entertain his children by producing simple tunes playing a recorder through his nose.